Bulldogs are America’s sweethearts. That’s why it’s hard to believe that years ago their ancestors were bred for bull-baiting, or dog fighting. Today, however, the Bulldog is a docile, dependable companion dog. Learn all about English Bulldogs to see if they are right for you. 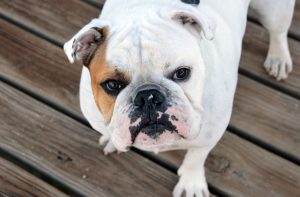 English Bulldogs are fun-loving, courageous, and dependable dogs. They are low-maintenance, easy-going dogs who love to be around people. They are happiest when relaxing alongside their human, cuddling on the couch, or being petted. Despite their easy-going nature, they can also be a bit stubborn and may need a little coaxing to do something they don’t want to do!

Why Are English Bulldogs a Popular Mascot?

You may have noticed that many schools, military institutions, and sports teams use the English Bulldog as their mascot. This is because the Bulldog is tenacious and tough–two very commendable qualities! Most notably, they are the official mascot of the United States Marine Corps. The first mascot of the US Marine Corps was an English Bulldog named ‘Pvt Jiggs’ who lived on a base in Virginia. Pvt Jiggs quickly rose in the ranks, and has paved the way for a series of Bulldogs to hold the title.

Unfortunately, English Bulldogs are prone to developing certain health issues due to their build. Because of their short, compact bodies, they are more likely than other breeds to develop joint and weight issues. Although they don’t require much exercise, it’s important to keep your English Bulldog active by taking daily walks. This will help to combat obesity and reduce the their risk of developing joint pain.

English Bulldogs are a popular family pet for many reasons. They get along great with children and make gentle lifelong companions. Even if they don’t spend much time playing, they are usually happy to watch from the sidelines!

Interested in adopting a dog or cat? Visit getyourpet.com to start searching pets for adoption near you.