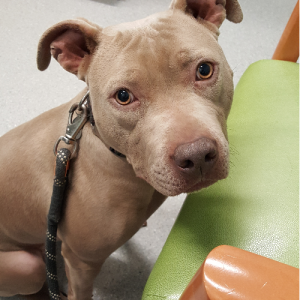 It’s no secret that Pit Bull-type dogs have a less than favorable reputation. But they’ve gotten a bad rap. To set the record straight, I’m going to go into some of the most common misconceptions surrounding these dogs and what the reality is.

(If you want to know why I use the term “Pit Bull-type dog”, I suggest you take the time to read “Pit Bull: The Battle over an American Icon” by Bronwen Dickey. If that’s too lengthy, read this article for a shorter explanation.)

One of the most prevalent myths out there is that Pit Bull-type dogs have a unique “jaw locking” mechanism that allows them to latch onto things with more force.

The reality? No such mechanism exists.

Pit Bull-type dogs have a strong jaw, like many other breeds. They are mostly terriers, so their natural behavior is to bite and shake, as opposed to what you would see in bird dogs, with their gentle mouths.

Myth: Pit Bull-type dogs are more vicious than other breeds, and are more likely to bite.

The reality? All dogs have the potential to bite, and Pit Bull-types are gentler than many.

I’ve been around a lot of dogs – thousands, really – and I’ve learned one very important thing: Dogs do not bite without warning or cause.  Just like humans, dogs have the “flight or fight” response and biting is usually their last line of defense. If a dog is scared or feels threatened, they will exhibit many behaviors to try to communicate their mental state. The problem is that as humans, we don’t always know what to look for.

Lip licking, yawning or crouching can be signs of fear. If a dog is leashed, they cannot act on a “flight” instinct and they may feel they have no other option than to bite. While this rumor about “vicious” Pit Bull-type dogs has been circulating and taken as fact for many years, studies have proven the opposite to be true. Take the American Temperament Test Society’s findings for example: in tests measuring things like aggressiveness, protectiveness, and stability, both Golden Retrievers and Chihuahuas scored worse than Pit Bulls.

Personally, I can tell you:  I have been bitten multiple times… but it has always been by a Chihuahua or other small dog!

Myth: Pit Bull-type dogs are routinely selected to fight other dogs, and so must be aggressive towards people.

The reality? Dog-aggression and people-aggression are two completely separate traits, and should be treated as such. Unless a dog, any type of dog, has been trained to attack humans, it’s likely to love people just the same as any other dog would.

It’s past time that we put some facts behind the way we talk about Pit Bull-type dogs instead of letting emotion, assumptions, and common misconceptions guide the conversation.

Interested in adopting a Pit Bull-type dog? Check out some of these lovable Pit Bull-type pups currently looking for a home on Get Your Pet:

Benji – Will fall asleep on your lap every night!

Blue – Knows how to give paw and lots of kisses on command.

Eisa – Can never get enough attention!

Ella – Fully potty trained and needs a yard to run!

Isabelle – Friendly with all animals